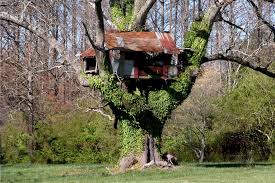 Looking for Alaska used to be my favorite book, then it was Cat’s Cradle, and now I think it’s The Bell Jar. I really did like The Bell Jar. I really like most books I read. Nutshell was pretty good too, by Ian McEwan. Ian McEwan? I think that’s right. He also wrote Atonement, so, whoever wrote Atonement also wrote Nutshell. It was a story based on Hamlet, told from the point of view of an unborn fetus. It was pretty good.

Anyway. I like books about sadness and death I guess. Depression. I like things that remind me of myself. Things that make you think.

BUT. I’ve also been enjoying Little Women, which is so bright and positive and cheery and simple. I just love it. It’s so innocent and nostalgic. I wish I lived it.

I want a treehouse. I’ve always wanted a treehouse. It was one of those things my parents promised me but never got. I would read in it, until the bees found it. Then I would have left it to rot, and my parents probably knew that. But I still want one.